May 5th, the day of the ultrasound, finally arrived. I don't think I slept more than five hours the night before. I kept waking up to go to the bathroom or let the dogs out and I just couldn't go back to sleep. I kept imagining what I would see on the ultrasound and how our lives would change as a result.


I was up bright and early on the morning of May 5th. My son came into my room around 7 and told me he was ready to go to the ultrasound. Since the appointment wasn't until noon, we had a lot of waiting to do! I kept myself busy with housework all morning until it was finally time to go. My heart was racing all morning, especially once we got in the car.


"A" was hilarious on the car ride. Every 10 minutes he kept saying, "We're here at the ultrasound!" I guess some of my excitement had rubbed off on him. Finally, FINALLY, we arrived at Tiny Toes Prenatal Imaging. Unfortunately, they were running about 30 minutes behind. Also unfortunately, my bladder was extremely full.


When I first made the appointment for the ultrasound, the woman at Tiny Toes told me to make sure I was well hydrated. She recommended drinking at least 4-6 bottles of water for the last 5 days before the appointment. I was also told that drinking orange juice before an ultrasound can help because sweet juices help get the baby moving. I was so worried that we would get all the way there and they would do the ultrasound only to find out that the baby was asleep or wouldn't move enough for the tech to identify the gender. So....I went a little overboard with the hydration. The morning of the appointment, I drank and drank and drank.....milk, water, OJ, whatever I could get my hands on. I even forced myself to finish a whole cup of coffee. That's right- forced myself because apparently the baby of "Coffee Addicted Mommy" hates coffee and I gag on it every morning. I brought a water bottle in the car with us and also crammed a banana and chocolate granola bar down my throat. I had waited a month for the appointment- there was no way in hell that baby wasn't moving!!!!!!!!!!!


By the time we arrived at Tiny Toes, I had to pee so bad I honestly though about using my 3 year old son's travel potty. I raced into the office and asked where the bathroom was before hubby and A could even get out of the car. The woman behind the desk kind of made a face and informed me that it wasn't the best idea to pee before the ultrasound because the fuller my bladder, the more they can see. I nicely informed her that I absolutely could not wait and would chug TWO bottles of water before my 12pm appointment (it was 11:50am).


True to my word, I drank those bottles of water; one of them while I was on the toilet. I told you- I was determined to make sure they could see that baby! Good thing I went because they didn't end up taking us into the ultrasound room until 12:30. Now 30 minutes might not seem like a long time, but when you've been waiting over a month for an appointment and have a rambunctious 3 year old boy with you, thirty minutes seems like a lifetime.


While we were waiting, my mother-in-law (MIL) called to check on us. She told us that hubby's almost entire side of the family was at her house to watch the ultrasound. Oh yea, this place we went to was so awesome that they offered us something called Sonostream live. Basically it was a link that we sent to our families that allowed them to view the ultrasound from their computers in real time. They also would be able to hear us because there were microphones in the room. It would be like they were right there with us even though they were 5 hours away! (My parents were traveling at the time so they didn't have the chance to watch it :( ) MIL told me that they were all gathered at her house (almost 10 of them) and were drinking coffee and eating donuts while standing around the computer and waiting for the ultrasound to begin. This brought tears to my eyes. Not just because I would have killed for a Krispy Kreme donut, but also because I was so happy that hubby's family wanted to take part in the whole experience with us.


Around 12:30, they finally brought us back and got everything set up. Things started to feel surreal at that moment. I'd hyped up this ultrasound for so long and been so excited about finding out that I was almost sad to finally know what it was. I knew the moment the ultrasound tech put the jelly on my stomach that my son was out of patience. Thirty minutes of waiting in the waiting room had done him in. His patience was gone and he started to get a little crazy in the room. He tried to finger paint with my belly jelly and was trying to climb on the table with me. Poor hubby had to try to keep him occupied so the tech could do the ultrasound and I feel a little bad that he wasn't able to truly enjoy the experience. On the other hand, it was so important that my son be there and be a part of things even before the baby arrives so I'm glad we took him.


I asked the woman to please let us know when the Sonostream was up so we could text hubs' family. The tech informed that once she forgot to tell a couple that the family could hear them and the woman made some comment about someone in the family's big nose. Whoops!!


And the moment you've all been waiting for.....the ULTRASOUND! I half listened as the tech told me what she was going to do. My mind was racing. I did hear her say that if the baby was in a good position for a 3D shot that she would do that first instead of gender. She also told me she might ask me to change positions or have to poke my belly a little to get a good shot. Hey, whatever is necessary lady! JUST TELL ME WHAT I'M HAVING!!!! 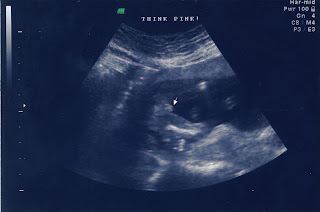 My MIL later told me that the moment the ultrasound started, my oldest sister-in-law screamed, "It's a girl!!"" We could pretty much see the legs right away. I kept looking and looking for the little penis but at first, baby's legs were closed. The tech smiled at me and said, "It's looking like a girl guys but let's get some better views." Miraculously, baby's legs opened and again, I searched for the penis. There was something small between the legs and that's when she said, "Ok, it really looks like a girl now! Let's see if we can get a better shot!" She wrote, "Think pink!" on the top of the ultrasound screen.


My heart stopped as she searched for an even better view of the baby's genitalia. Hubby spotted something and remarked, "Oooo, I think I see a penis!" The tech grinned and said, "Nope, that's the umbilical cord. This is definitely a girl!" 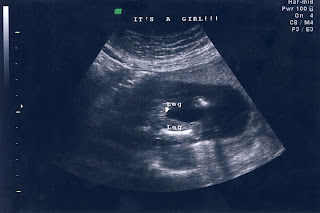 She froze the screen on the best shot of baby girl's legs. Sure enough, I saw the three lines I'd been told meant it was a girl. I went into shock when she wrote, "It's a girl!!!!!!!!!!!" on the top of the screen. I don't remember much after that, I swear I was in shock for the whole rest of the ultrasound. Hubby's family could hear us, but we couldn't hear them so I had no idea if they were even able to see what we could see yet.


I honestly didn't react the way I thought I would. I thought I might shriek, scream, or cry. I'd even texted my sister-in-law moments before the ultrasound to say, "Oh shit! I wore mascara!" No tears, just me sitting on the table in shock. I could hardly believe we were going to have our perfect set, our boy and now our little girl.

We got some great 3D shots of her moving around and even got to see her little hand on the screen. When we saw her hand, we told A that his sister was waving at him and he started waving back like crazy. At that point, my eyes did fill up with tears. We also saw her start hitting the umbilical cord with her little hand. The tech said that some babies do that because they like the vibration it causes.


When it was time to go, they gave us about 8 prints in an album of our little baby girl. No sooner did we get to the car then my phone rang. It was MIL, calling to say, "I told you so!" She had correctly predicted that we were having a girl and she was thrilled. In fact, she called back about 15-20 minutes later and was already out shopping! She thought it was so cool that they had seen and heard the entire thing with us. That alone made it worth the money for the ultrasound.

The rest of the day was a blur of excitement. By the end of the evening I was already starting to feel overwhelmed with nursery decor ideas. I had planned everything out expecting a little boy, not really expecting it to be a girl. I have to admit, a small part of me was sad. Although I am so psyched to have a daughter, part of me felt a loss. I had already named this little boy and decided on his room decor, etc, and now he will never be. Well, never say never....after all, there is next time!!!!


In the past week, I have already been shopping for baby girl 3 or 4 times! She already owns several outfits, about 15 hairbows and headbands, and two tiny pairs of shoes.


Uhoh hubby, looks like you're in major TROUBLE!!!!! Our lives have changed forever. Stay tuned and hang on for the ride.......
Posted by carafaythw at 12:57 PM